KONNEKT™ technology is a high-density packaging technology that allows components to be bonded together without the use of metal frames, reducing with it the ESR, ESL and thermal resistance to capacitors.

KONNEKT™ technology utilizes innovative transient liquid phase sintering (TLPS) material which has low temperature reaction of low melting point metal or alloy with a high melting point metal or alloy to form a reacted metal matrix. The result is a highly conductive bonding material that can be used to connect multiple MLCCs together to form a single surface mountable component.

KONNEKT technology enables a low-loss, low-inductance package capable of  handling extremely high ripple currents with no change in capacitance versus DC voltage and negligible change in capacitance versus temperature. With an operating temperature range up to 150°C, these capacitors can be mounted close to fast switching semiconductors in high power density applications, which require minimal cooling. KC-LINK with KONNEKT technology also exhibits high mechanical robustness compared to other dielectric technologies, allowing the capacitor to be mounted without the use of metal frames. 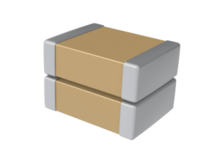 KEMET’s X7R with KONNEKT™ technology surface mount capacitors are designed for applications where higher capacitance and voltage are needed without requiring additional board space.

The Electronics Components, Assemblies and Materials Association (EIA) characterizes X7R dielectric as a Class II material. Components of this classification are fixed, ceramic dielectric capacitors suited for bypass and decoupling applications or for frequency discriminating circuits where Q and stability of capacitance characteristics are not critical. X7R exhibits a predictable change in capacitance with respect to time and voltage, boasting a minimal change in capacitance with reference to ambient temperature. Capacitance change is limited to ±15% from −55°C to +125°C.

In addition to their use in power supplies, these capacitors can be used in industries related to automotive (hybrid), telecommunications, medical, military, aerospace, semiconductors and test/diagnostic equipment. Automotive Grade devices are also available which meet the demanding Automotive Electronics Council’s AEC-Q200 qualification requirements.