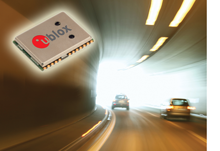 Thalwil, Switzerland - February 17, 2016 - u-blox (SIX:UBXN), a global leader in wireless and positioning modules and chips, announces the release of NEO-M8U, the industry's first Untethered 3D Dead Reckoning (UDR) module. Combining multi-GNSS (GPS, GLONASS, BeiDou, Galileo) with an onboard 3D gyro/accelerometer, NEO-M8U provides accurate positioning even where GNSS signals are weak or not available. It achieves this without any connection to the vehicle other than power.

The u-blox NEO-M8U module provides superior multipath suppression, which improves position accuracy even in tough environments, such as urban canyons, tunnels, or parking garages. For example, in London's city center area, NEO-M8U is typically three times more accurate than a traditional GNSS receiver. In addition, NEO-M8U offers instantaneous position immediately after power-up, without the need to wait for a first fix as with regular GNSS receivers.

One of the key advantages of NEO-M8U is the ease of product development and installation. NEO-M8U looks and behaves just like a regular GNSS receiver and does not require any special mounting or connection to the vehicle. Thanks to its intelligent sensing and continuous self-calibration, NEO-M8U can be installed in the vehicle in any orientation.

Other features are its real-time update rate of up to 20 Hz benefiting a smooth navigation behavior, as well as the high-speed access to the raw sensor data allowing for driving behavior analysis and detection of sudden acceleration, such as during an accident.

"NEO-M8U, with its performance and simplicity, is a game changer for a range of new use cases such as navigation, fleet management, road pricing, usage-based insurance and even 'find-my-car' applications," says Andrew Miles, Product Manager, Dead Reckoning at u-blox. "The gain in accuracy by NEO-M8U in three dimensions will enhance any vehicle based application in cities with high-rise buildings and narrow streets."

NEO-M8U will be available in early Q2, 2016. It can upgrade any existing NEO design due to the inherent pin and software compatibility to other NEO modules.