Solutions Ready for the Next Level of Computing

Innodisk is solidifying its position at the forefront of industrial-grade innovation with new products optimized for industrial and semi-industrial use. These products include the brand-new 96-layer 3D NAND series of flash storage products, combining the best of 96-layer 3D NAND’s high capacities and low cost with Innodisk’s industrial-grade technologies, as well as a 4-port CAN bus module that enables next-generation control in a wide range of applications.

Innodisk is also delighted that its industrial prowess is once again recognized in international rankings. For the third year in a row, Innodisk ranks first in industrial SSDs worldwide. Innodisk also ranks as a global top ten DRAM supplier for the second year running.

Expansion Modules for Even More CAN Bus Innovation 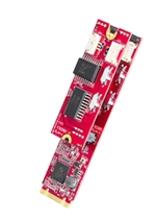 Innodisk expands its hugely popular CAN bus expansion module lineup with the M.2 to four isolated CAN bus 2.0B module (EGPC-B4S1) – providing system integrators with even greater CAN bus expansion options. The addition of a four-port CAN bus module is a particularly attractive option for autonomous vehicles, where innovators require a large number of CAN bus ports for systems such as lidar, radar, and camera systems.

Innodisk’s introduction of the four-port CAN bus expansion module comes as Innodisk experiences skyrocketing demand for its CAN bus solutions – with sales up close to 100 percent year-over-year. As CAN bus solutions continue taking applications such as autonomous vehicles, industrial automation, and healthcare by storm, Innodisk looks forward to enabling customers to continue innovating with new CAN bus solutions.