CML Microcircuits announces that the EV6550DHAT is available now to purchase. 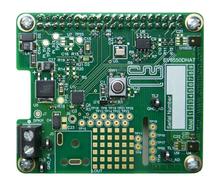 The EV6550DHAT brings together the Raspberry Pi and the CMX655D Ultra-low Power Voice Codec in a convenient and inexpensive way, enabling easy demonstration of the CMX655D and providing improved low power audio capabilities to the Raspberry Pi. The CMX655D is an ultra-low power voice codec targeted at digital voice and sensor applications that require the lowest possible power consumption, including battery powered and small form-factor applications.

Traditionally voice codes have interfaced to electret microphones and speakers providing A to D and D to A functions, using precision oversampling data converters. Recent advances in microphone design using MEMS techniques are now changing this, along with higher efficiency speaker driver architectures such as Class D topologies. Both of these advances enable significant reductions in power consumption which is needed to address new applications such as voice control, that require always-on operation. Such applications that are often battery powered, driving the need for ultra-low power consumption.

The CMX655D addresses these needs, providing an update to the traditional voice codec, that is both very low power and small in size. Microphone interfaces connect single or dual MEMS microphones to the device, with parallel processing of each data stream to maintain phase alignment between the two channels.

The device interfaces via standard serial busses that are commonly found on many microcontrollers, DSPs and low cost single chip radio transceivers.

The CMX655D is available in a small VQFN-24 package and supported by a range of development tools, including the EV6550D evaluation kit.